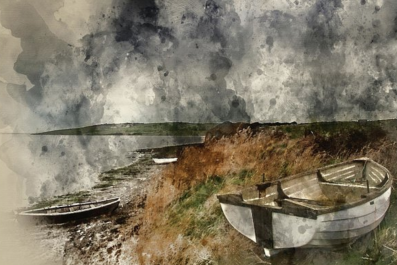 The pouring rain mixed with Salma’s sweat, soaking her hair, which was pulled back in a tight braid, and streaming down her face. Salma pulled the Fisherman’s Knot taut and wiped her forehead. On the other side of the sailboat, Leo suddenly pointed in the direction they were headed and yelled over the roaring thunder and the rain violently smacking the ocean surrounding them, “Look! An island!”

Salma dropped the rope and stumbled to the front, slipping several times. She squinted through the storm and, sure enough, far in the distance, a tiny island was visible. Salma gasped and promptly started laughing and crying at the same time. She and Leo embraced, cheering and whooping and jumping, causing the boat to rock back and forth.

Later, the two of them were drifting closer to the island. “Past the shore is all vegetation!” Salma exclaimed. “There’ll be food and water!”

“The island is uncharted,” Leo said, studying a small spot on a large map closely. “I think we’re the first to discover it!”

“That’s great news! What will we name it?”

They continued to discuss fun-but-unrealistic things they would do with their new island. When they were only about thirty feet from the shore, Leo looked a ways along the coast and said, “What is that?”

“What is what?” Salma asked, looking in the same direction.

Their boat slid into the soft sand, and they stepped out. Salma collapsed onto the sand and let out a shrill laugh, overflowing with relief. “Hang on,” Leo said. “I’m going to go see what that is. It looks like…” he trailed off and started walking quickly toward it.

Salma got up and followed slowly, taking in the beautiful island. A short walk later, they were close to the thing, and Leo called, “Salma! It’s a boat!”

Salma turned. “What? But I thought we were the first people here.”

“Oh, well. At least we’re here!” Salma turned toward the water and let the breeze run across her hair.

She heard Leo mumble something, but she didn’t pay attention. Salma couldn’t describe in words how happy she was to get off the boat for the first time in weeks. She was about to tell Leo just that when he screamed her name. “Salma!”

Salma whirled around only to see a faint rustle of leaves in the thick vegetation in front of her. Leo was gone.

She turned her head slightly and opened her mouth to say something, then shut it. “…Leo?”

Salma took a step forward, toward the rustle, then another, and another. She watched the sand sink from her weight and seep between her toes. It was a nice feeling. “Leo!” she called.

Salma was only a few paces away from where the rustle had been. “Leo!” she yelled as loud as she could. “Don’t scare me!” Salma looked up to see if he was crouched in a tree, ready to jump at her, and in that moment she felt something cold grab her bare ankle and she shrieked as she was dragged into the bushes. Selma Morales and Leo Lawrence were never seen or heard from after their journey’s end.

Looking for something to read? Here are a few of my favorites

A Sarcastic Post About Your Own Social Distancing Guidelines (Or, An Unofficial Guide to Covid-Code)

A Snippet of my Stats

A Few of My Readers