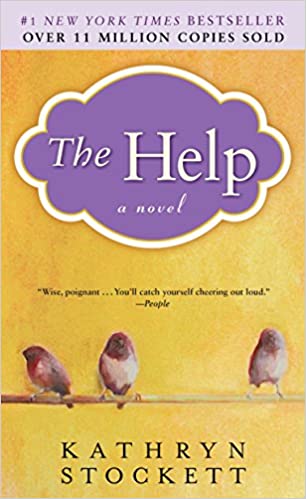 I recently finished The Help by Kathryn Stockett. It was an exciting historical fiction story with twists, a wide range of emotions, and several points of view that takes place in Jackson, Mississippi.

Aibileen Clark is a maid to Mrs. Leefolt with a son named Treelore who died a few years ago. Aibileen says at the very beginning of the book, “I done raised seventeen kids in my lifetime.” (pg. 1) The one she’s raising in this story is a toddler named Mae Mobley.

Minny Jackson is best friends with Aibileen. Minny has been fired multiple times because she talks back. But she is a very good cook.

Skeeter Phelan’s real name is Eugenia, but she is very tall. “I was not a cute baby. When I was born, my older brother, Carlton, looked at me and declared to the hospital room, ‘It’s not a baby, it’s a skeeter!’ and the name stuck.” (pg. 66) Her mother is desperate for her to find love, but it isn’t a top priority for Skeeter. She wants to be a writer. Skeeter also often notices that her friends, Elizabeth (Mrs. Leefolt) and Hilly aren’t treating the maids well. Constantine, her own maid who raised her since she was born, was gone when she came home from college, and her mother says she quit.

Skeeter gets a job at the Jackson Journal writing in a cleaning advice column, but she doesn’t know anything about it. So she arranges with Elizabeth that she’ll come sometimes and have Aibileen help her with the column. Every time, she tries to get out of Aibileen what happened to Constantine, but Aibileen won’t say much.

Meanwhile, Minny has a new job with a lady named Celia Foote that Hilly and Elizabeth hate because she’s very strange. Minny thinks she’s strange too, but Celia is a lot nicer to Minny and mainly wanted her to give her cooking lessons.

After a while, Skeeter offers to Aibileen her idea: write an anonymous book featuring interviews with maids in Jackson. At first Aibileen thinks Skeeter is out of her mind, because of what could happen if they got caught, but eventually she agrees to it. Together, they try to get more maids on board and to write this book revealing the truth about what it’s like to work for a white family in Jackson, Mississipi.

This is an amazingly-written book that is nearly impossible to put down once you get into it. As soon as I finished it, I was so excited to watch the movie — which was very good too (of course, not as good as the book though!). I highly recommend both to pretty much anyone over 11 or 12.

A teenager obsessed with words of all kinds. When I’m not reading or writing, I like musical theater, drawing, and painting. (she/her) View All Posts

2 thoughts on “Book Review: The Help by Kathryn Stockett”